It’s the most wonderful time of the year! We have started listening to our Christmas music playlist in PE and it’s been great.

The students in 4th – 8th grade spent time playing volleyball at the beginning of November.  They had some time to work on skills and play some games.  After volleyball they have been playing Team Handball and Speedball.  These games fast-paced and fun for the students.

Coming up, we will have some cosmic bowling for the entire school.

Have a Merry Christmas!

We have had a busy few weeks in our PE classes.   The 4th – 8th grade students have been participating in a variety of activities.  Students were able to work on soccer skills and play some small games.  The 7th and 8th grade were fortunate enough to play some games out on the field.   After the soccer unit, students played a game called table ball.   This is a lead up game to round net.  It works on team work and reactions.  We are currently in the middle of a volleyball unit and will finish in the next week.

We are off to a great start in PE this year.  The students in K-3 have been learning how to move in space with a tag game called “Fire and Ice Tag”.  Some students have a blue tag wand to freeze the other students.  Some other students have a red yarn ball (fire ball) that they can pass to a friend to unfreeze them.  They have also been working at various striking stations using different equipment to practice their striking skills.

4-8th grade students have started the year with a backyard game called Kan Jam.  This is a frisbee game that is played in groups of 4, 2 students per team.  The object of the game is to score points by either hitting the can with the frisbee or making an instant win by throwing the frisbee in the top of the can or through the slit on the front.  They just started working on some skills for the next unit, which is pickleball.  Pickleball is a paddle game that is similar to the game of tennis, but has some unique rules.

Welcome back to a new school year!  I am looking forward to seeing students in the gym for some fun and exercise.  Please remember to wear shoes that either velcro or tie and be sure to have them tied for class.

Happy Spring!  The students in 5th-8th grade have been busy in PE learning a variety of activities.  After spring break, students completed a floor hockey unit with skill development and small games in the gym.  They also completed a short unit on an introduction to lacrosse skills.  The main focus was on throwing and catching.  The students also played a new game called table ball.  This is game that involves a long table, a volleyball and working on control by hitting the ball onto the table, letting it roll to the floor, letting the ball bounce one time and then the opposing team must hit the ball back on to the top of the table.  The next activity the students will focus on is soccer.

Students in 5th-8th grade have been busy learning the game of handball.  This is a game using throwing and catching skills to move the ball down the court and attempt to throw the ball into a goal.  They will also be working on a game called speedball that incorporates the game of handball with some soccer and basketball skills included.

Students in K-6th grade were able to participate in some winter Olympic stations.  They were able to compete in bobsled, curling, freestyle skiing, speed skating and hockey shooting.

Happy New Year!  I hope everyone was able to enjoy their holidays, I’m glad to have the students back and getting active.

We are starting the year with some backyard type games.  Students in grades 4-8 have learned the rules for Spikeball and Kan Jam.  Spikeball is a game played on a round net with teams of 2.  Play is started with a serve into the net and then teams have 3 contacts before they have to hit the ball back to the net.  It’s a similar concept to volleyball, but the net is on the floor (like a trampoline, but with a net).  Kan Jam is a disc game.  Again, the game is played in teams of 2.  Partners stand on opposite sides of one another with Kan on each side.  One player is the thrower and one player is the deflector.  The thrower tosses the frisbee toward the opposite can and tries to either make it in the can, hit the can on their own or get help from the deflector to redirect the frisbee either into the can or into the side of the can for various points.  After one throw, the deflector becomes the thrower and the thrower becomes the deflector, this is considered one turn for the team.  Once a team has completed a turn, the opponents have a chance to play.  Play alternates in the this fashion until a winner is determined.

Students in K-3 have been working on skills related to Spikeball and Kan Jam.  They have been practicing their bounce and catch skills, striking skills, tossing skills and deflecting skills.

Students in 5th-8th grade worked on basketball skills and games.  They did activities such as basketball bowling, hot shots, dribble knock out and home run basketball.

They had a chance to play an invasion game called battleship involving knocking down opponents cones and bowling pins while protecting their own battleship area.

Students are currently working on badminton skills and playing games against a variety of opponent.

Students in 5-8th grade spent time in October working on football skills and playing games involving those skills.  They were also able to play ultimate kickball and have some choice time during class as a treat to end the month.

Students in the younger grades worked on building hula huts and playing games with this skill.  They also worked on some locomotor skills and bean bag activities.  The K-4th grade finished the month with Halloween stations.

We’ve had a great start to our school year in physical education.  Students in our lower grades have been working on overhand throws and underhand tosses in a variety of games and activities.  We have also been using our new projector for a couple of warm-up activities.  Students in grades 4-8 have been busy working on volleyball skills and have been able to play games such as 4 square volleyball, newcomb and a round robin volleyball tournament.  We are looking forward to more exciting activities to come.

Welcome to physical education!  We are excited for the new school year.  Please come to class prepared with the appropriate shoes for participation and your water bottle.

I hope you all have an enjoyable summer.  Take some time to get in some exercise and enjoy being active.  I’ll see you in the fall! 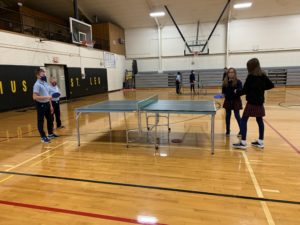 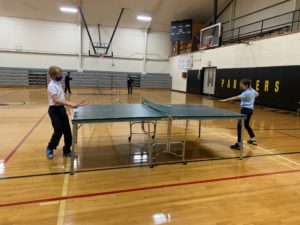 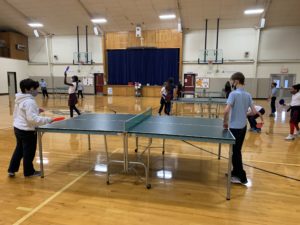 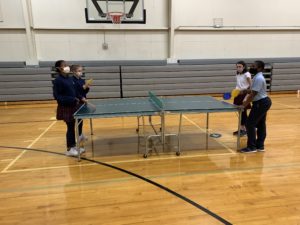 We are back into the swing of things in the new year.  The 5th-8th grade students began the year with a table tennis unit.  They used their remote learning time to learn the rules of the game and they were able to put that knowledge into practice when they returned.  We will begin our basketball unit soon focusing on skill development and shooting activities.

Welcome SPSL community!  We have been blessed with amazing Fall weather to have PE outside. Our 5th-8th grade students were able to play a frisbee game called Kan Jam.  We also played a modified game of kickball and some sideline soccer.  We look forward to some Pickleball games in the next few weeks. 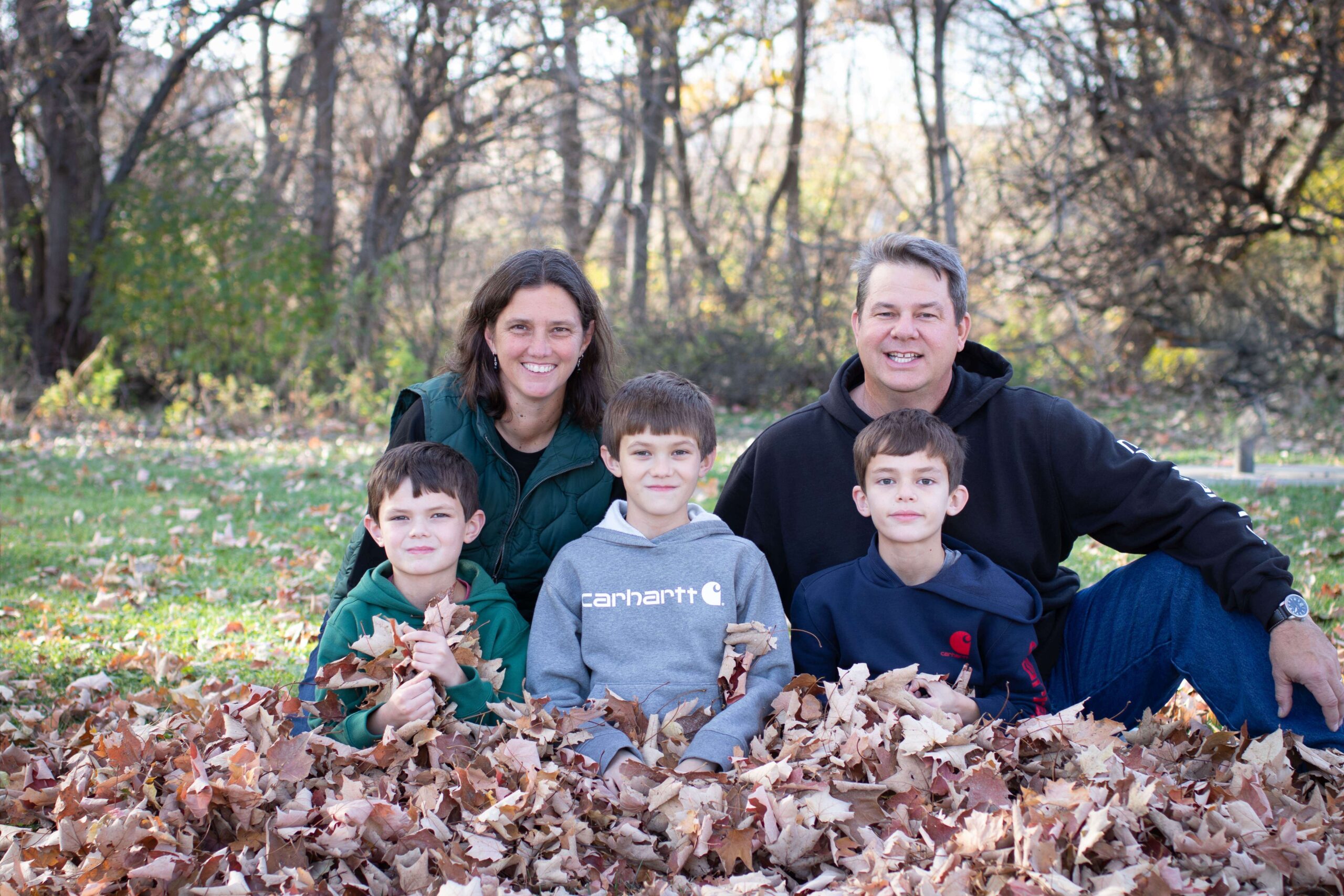 Hello! I am Mrs. Mary Morrison. I am glad to be back at St. Pius X/ St. Leo School. I have taught physical education for over 16 years, this is my 3rd year at St. Pius X/St. Leo School. My husband and I have three sons that all attend SPSL. I'm looking forward to a great year!